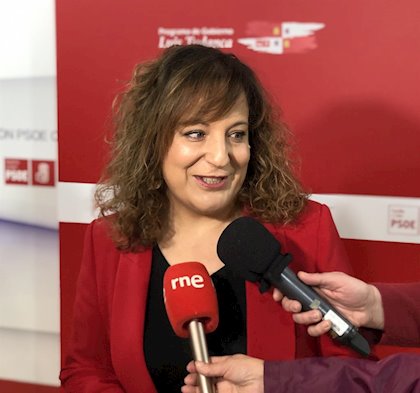 Iratxe García calls on national leaders to show unity and ambition, and to accelerate important decisions

Ahead of the European Council that will convene this afternoon, the president of the Socialists and Democrats in the European Parliament, Iratxe García, met with the PES president Sergei Stanishev, with the S&D heads of government as well as S&D Commissioners.

“I hope that the heads of State and government will seize this opportunity to send a strong message of unity and ambition. In these difficult circumstances, this is what European citizens are expecting. On one hand, we must show unity to impose sanctions on the Belarusian regime, for their violent repression of peaceful protests following the fraudulent presidential elections. Free and fair elections should be organised as soon as possible in accordance with international standards and with the ODIHR election observation. The main political groups in the Parliament have proposed the Belarusian opposition for the Sakharov Prize. I hope we can see the same unity in the Council.

“Only a strong and united Union can use its leverage to demand Turkey to respect international law. We think there is still room to de-escalate tensions in the Eastern Mediterranean, but Turkey must be willing to abide by the law as a starting point. We share borders and many challenges with Turkey, so it is in the best interests of all concerned to find ways to cooperate.

“We in the Progressive family are very worried, not only about the illegal drilling in the Mediterranean, but also about the new crackdown on the Turkish HDP, which is a sister party. Turkey is a neighbour we want to have good relations with, but this is undermined when the rule of law is not respected.

“The same is true for the European Union. It can only thrive if our values and principles are respected. We need an effective rule of law conditionality mechanism in the EU budget. The current position adopted by the Council lacks some crucial safeguards. I hope that the negotiations with the Parliament will start as soon as possible so that we can strengthen the weak proposal currently on the table.

“National leaders will also be discussing how to strengthen EU’s resilience and how to combine a strong single market, digitisation and the ecological transition with the effects of the pandemic. Well, in order to face these challenges we must have an EU budget for the next seven years and the Recovery Fund available as soon as possible. So, we all need to hurry up and decide.

“Lastly, I hope that the EU can contribute to a cease-fire in Nagorno-Karabakh. The European Union itself is an example of how borders can be overcome and minorities can peacefully live together. But we need Russia and Turkey on board to find a way out of this crisis.”